SAFE-ANIMAL database is a collection of data used by both large and small cities where dogs are electronically chipped. Among these cities you will find:

Warsaw and Environment Bureau which supervises the complimentary dog chipping project in the capital. Animal shelter in Paluch. So far, 40,000 entries have been imported. As a result, the Warsaw dog register ANIMALUM was directly connected to SAFE-ANIMAL on 17 March 2010.

Łódź, where Public Utilities Department of UMŁ has been registering dogs and their owners in SAFE-ANIMAL for years. Additionally, SAFE-ANIMAL cooperates with a pet shelter in Łódź. So far, approximately 20,000 entries have been registered.

Poznań, where the project is run by Public Services. The campaign has been operated for a year and resulted in 30,000 animals entered into SAFE-ANIMAL database. The campaign is coordinated with Animal Shelter on Bukowska Street.

Szczecin. Pets have been micro chipped for a few years, which resulted in enriching the SAFE-ANIMAL database with over 35,000 dogs and their owners' data. The database is run by Animal Shelter at Municipal Services Office.

Moreover, Leszno, Białystok, Świnoujście, Białystok, Przemyśl, Szczytno and many others...

Asylum for Dogs and Cats in Tarnowskie Góry 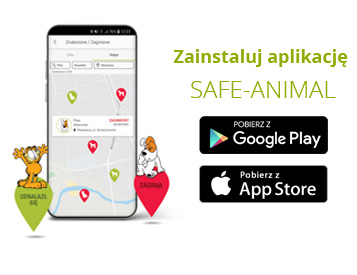